Why Is My Engine Misfiring?

An engine misfiring happens when the combustion breaks down. What are the signs of an engine misfire and the cause, lets find out.

Misfiring is more common with newer or modern engines. If you believe your engine is misfiring, it’s not usually an easy thing to investigate if you don’t know where to start or what you are looking for.

With our guide, we will go over some possibilities that might be causing the problem. To start with, you should know what signs to keep an eye out for.

The most common signs of your engine misfiring are rough acceleration or rough idle. Other signs include a “check engine” light and poor engine performance. In some cases, you will notice the check engine light will blink while the engine is misfiring.

Here is a detailed list of the most common symptoms or signs when an engine misfires:

As we briefly touched on. You might experience a strong or light jerking coming from the engine. Misfiring often happens under load from the engine such as when you are accelerating hard. The most common occurrence of misfiring is in high gear, low RPM, or the accelerator is pushed to the floor. This is referred to as Rough Acceleration. 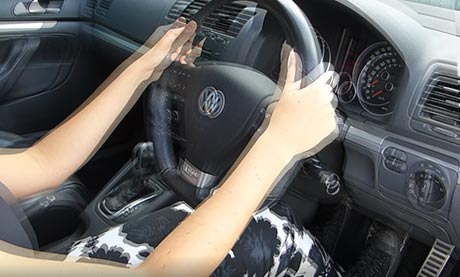 Sometimes when idling, the engine will misfire caused by the engine sensors that will receive defective values and the air-fuel mixture is messed up. These issues can lead to a very uneven idle which will jump up and down causing a rough idle and in some cases, the engine may literally shut off.

Your engine is most vulnerable when there are small air-fuel mixture problems while idling, so that’s probably the first place you should look into.

Your car’s engine is balanced during manufacturing and usually has balanced axles but there are some techniques to get as few vibrations as possible.

When one or more of the cylinders are not firing correctly, the engine will become unbalanced. This can lead to heavy vibrations inside the cabin when accelerating or when idling.

Newer cars have excellent monitoring devices for the different sensors on the engine. If a sensor fails or picks up a signal that something is not right with the engine, it will send information to the engine control unit.

Misfiring can cause the O2 sensors to get incorrect information and generate a mixture that is too rich or overly diluted. A rich or diluted mixture can lower the acceleration making your car seem weak. Your car will not rev over 3500 RPMs and could shut off the boost pressure from the turbocharge.

6- A Change In The Engine’s Sound

Even if you only know very little about cars, you probably have heard a difference in sound from one engine to another. V8 engines have a completely different sound from that of a four-cylinder engine.

The Most Common Reasons Why An Engine Will Misfire

The first reason for a car misfiring is a bad ignition coil or bad spark plug. Another leading problem could be fuel-related such as a poor fuel injector or fuel pump. In some rare cases, it could be a low engine compression.

1- A Bad Ignition Coil or Distributor In Older Cars 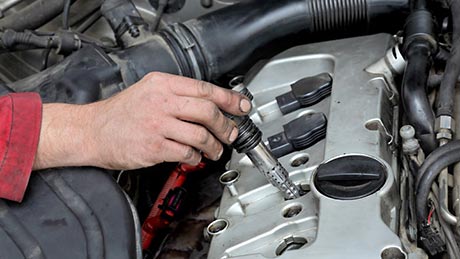 Older cars have a distributor and in some cases an ignition coil. If you have separated spark plugs, unplug each coil and see if you can find any cylinders that are not responsive.

This is the second leading cause for misfiring. The spark plugs fire up the cylinders and they can get worn out over time. In general, spark plugs are cheap and very easy to replace.

Intake leaks near the cylinder heads are quite common when it comes to spark plugs. This particular problem was a lot more common in older cars without steel gaskets for the intake.

If you do have an older car, you should check for leaks. If you have a newer car, it’s probably worth your time to check other signs of leaks around the intake manifold gasket or the intake. You can also check for broken vacuum hoses.

If you have trouble codes for misfires on all cylinders, you should definitely check out your fuel pressure. 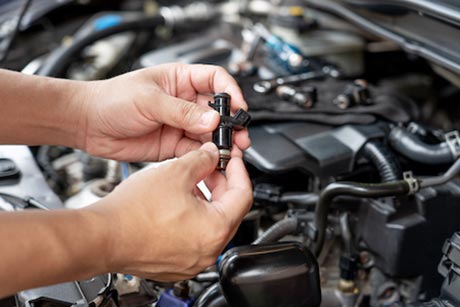 This was a problem approximately around 2017. A defective fuel injector can cause your engine to misfire and can be rather difficult to diagnose without flow testing them.

Injector issues are not particularly common in newer cars. You should check out other possible issues first then check the injector if needed.

6- Low Compression Or Damage Inside The Engine

If you have checked everything, there is always a chance your engine has low compression or other damage inside it.

A defective timing belt adjustment could cause low compression resulting in misfiring. If you know the timing belt was recently replaced, you should double-check with the technician who installed it. 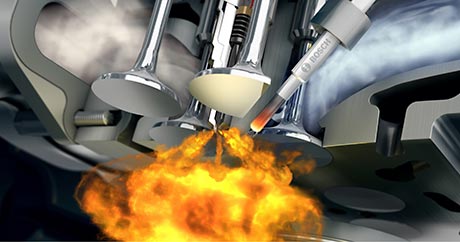 If you have an incorrect air-fuel mixture it can cause misfiring. Many different sensors can also cause a poor air-fuel mixture in your car such as the MAF sensor, O2 sensor, Coolant Temperature sensor, or other problems.

What Is A Misfire?

To understand what a misfire is takes going through the car engine basics first and foremost. You need to get a good picture of your pistons and crankshaft to ensure they are moving inside the cylinder when your engine is running. The pistons are pushed down by the explosion inside the cylinder.

When the crankshaft is spinning the piston is pushed down. The engine is working in four steps which is why that engine type is called a four-stroke engine.

This is how it works:

That’s how a four-stroke engine works that is found in almost all modern car engines today.

Knowing all this makes it a lot easier to find the culprit that is causing a misfire. In theory, there are not a whole lot of things that could cause misfiring.

When you start diagnosing your car, you will understand that is not always as easy as you might think when looking for the problem.

Understanding how components and devices work in your car gives you the upper hand to fix the problem in a timely manner. If you are not mechanically minded or inclined, contact your technician to get misfire issues investigated , repaired or replaced in order to avoid the issue escalating.

For engine misfire problems in and around Manchester city centre and North Manchester, you can count on Servicing Master. You can get a quick repair quote from a local premium garage close to you by using our simple car repair quote form. We also offer a collection and drop off service. A convenient, friendly and affordable service, try Servicing Master once and you’ll never go back. Give us a call now on 0161 302 0201.

Get A Quote Now

Why waste any more time searching for a reputable professional garage wth a good rate. Simply click the Get Started button below to complete our quick and easy quote form, we’ll do all the work for you and there’s no obligation.

A small sample of our thousands of satisfied customers.

These guys do what they say on the tin. I work for NHS so I am usually always at work these guys collected it while I worked, liaised via email as i couldn’t answer the phone.

Carried out the work and dropped it back off for me, Happy with the service and the nice touch at the end vehicle came back nice and clean!

Top service, knew straight away what the problem was. Had it back next day which was great, glad I’ve found a garage I can use in the future would defiantly recommend. Even gave my car a wash.

Had my car service and mot with Bury branch. Excellent service kept me posted with everything they were doing. Professional, friendly and helpful definitely recommend them. Thanks.

EASY FROM THE START!

Booked online, great realistic price, none of this cheap drag you in and shake you down when you get there. Car collected from work, serviced and mot all done and straight forward, I needed an additional bulb which they rung me and told me.

Car delivered before I finished work and they even gave it a long awaited wash and vacc Lol!

All done from my desk at work defiantly be using them for my wife and daughters vehicles!

Great people to deal with. Trusted with my family’s cars for many many years. Great service, go the extra mile. Thoroughly recommend for anyone looking for work on their car whatever the marque.

Just a quick line, I have finally found a garage where I have complete confidence. Professional and informative, Lisa and Mike are a pleasure to deal with. Thank you.